TO Castiglione of Sicily, in a puzzle of districts on the slopes of Etna, Mariangela, Francesco ed Emanuele Cambria, today wine entrepreneurs, as kids, waiting for lessons to resume at school after the summer holidays, ran among the hazelnuts, in the agricultural property purchased by his grandfather in the 1960s. They would never have imagined that the “country house” would become theirs work. To remember it is Mariangela, the eldest daughter. “In the 90s – he explains -, our father, flanked by his brother, following the vocation of the territory, decided to redevelop almost entirely the 100 hectares of vineyards and created the winery Cottanera, which takes its name from the district in which it stands ”.

The company has always had a strong emotional value for the three brothers, who had decided to pursue their dreams, all far from the earth: Mariangela, with a degree in political science, had gone to Ireland to perfect English, with the intention of attempting a diplomatic career; Francis had started his career as a lawyer a Milan, and Emanuele, the youngest, had enrolled in law. 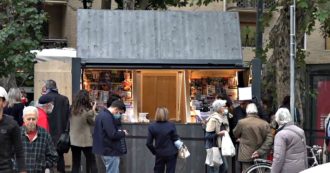 Milan, the first eco-sustainable newsstand based on the model of wooden huts is born: “Not just newspapers but a reference point for the neighborhood”

“We came back when, about ten years ago, our father suddenly passed away. To tell the truth, already in 2003, after the experience of Vinitaly – he says Mariangela -, I was fascinated by the possibility of doing what I liked, that is to travel the world and speak other languages, promoting our wines. Then, after the death of my father, the decision to take over the reins of the company was unanimous “. Mariangela today he takes care of the marketing and communication of the family business as well as promotion abroad and hospitality, while Francis, hanging up his toga and wearing his country shoes, takes care of production and management control and Emanuele manages the commercial area.

“We never thought we would go back in Sicily, but we could not resist the call of the earth, which our father taught us to love. Aware of the treasure he left us, as laymen we approached this new world by increasing production and orienting ourselves to the cultivation mainly of native vines “, continues Mariangela explaining the restyling of the environments and labels, without ever losing sight of respect for territory. The three brothers admit that the choice to return to Sicily has upset their daily life, but for Francesco the beauty of working in contact with nature pays off all the efforts. “Certainly – he says – a metropolis like Milan it is fascinating and offers many opportunity, but the quality of life here is not comparable. And even the relationships are more genuine ”.

There have been difficulties over the years, especially because the sector for the three was completely new. But, also thanks to their oenologist Lorenzo Landi, they managed “to develop a solid project that ensures work, even in this period in which sales are halved and no tourists arrive”, he adds. Francis, burdened by the slowness of the bureaucracy and by a state that, especially during the pandemic, left the three brothers to themselves. Even now, however, the goal is to look ahead, starting with the redevelopment of an ancient ruin that will become a relais.