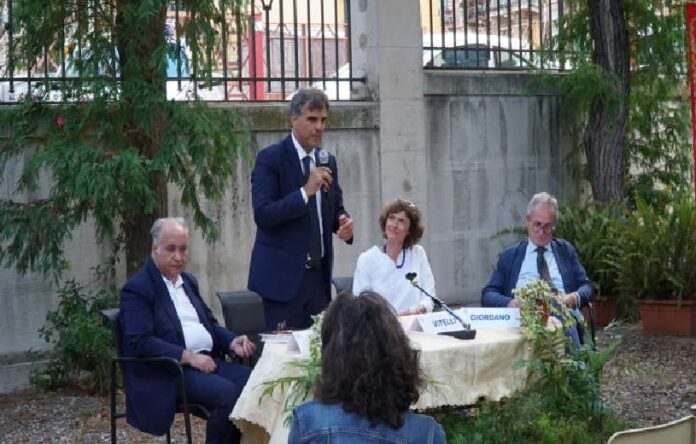 The Garden of the Department of Political and Legal Sciences hosted the presentation of the novel “La guerra di Nina” by Imma Vitelli, writer, journalist and, for a long time, special war correspondent for Vanity Fair magazine. The Rector, prof. Salvatore Cuzzocrea, who gave the greetings and the Vice Rector, prof. Giovanni Moschella. Profs. Luigi Chiara, Historian and Giuseppe Giordano, Philosopher.

As a correspondent Imma Vitelli told the major conflicts of the last twenty years in countries such as Afghanistan, Iraq, Lebanon, Israel, Pakistan, Somalia, Sudan, Congo, Libya, Syria, and many others. In his debut narrative novel “Nina’s war” he tells, against the backdrop of the Syrian conflict, a tormented love story between the protagonist and Omar, a well-known local photographer and also traces a moving and heartfelt tribute to the tortured populations of Syria. Starting from the experiences lived on her skin in the years in which she was a correspondent, Imma Vitelli describes in an acute and engaging way how, while in neighboring Syria the rumble of war tries to provoke the fall of dictator Bashar al Assad, in Beirut a young and reckless Italian reporter fully lives an intense adventure.

In Nina the writer transfers all of her interiority: “It is – commented the narrator – a 28-year-old girl who, going to the Middle East for the first time, discovers that her idealism was misplaced, that the world is not all black and white, that the dictatorship is capable to contaminate you. I personally, as a reporter, have understood that people can only be saved one at a time and that revolutions fail. Nowadays, I see things with much more ambivalence than I did twenty years ago. The most intense message of the novel aims to demonstrate how the political is private and the private is political. This means that everything that concerns us personally, then, necessarily becomes public. In the book there are several characters who act their wounds in the course of a terrible war, whereby the Syrian civil conflict becomes a feud within a family; undoubtedly this is the strongest message between the pages that both Nina and I have understood ”.