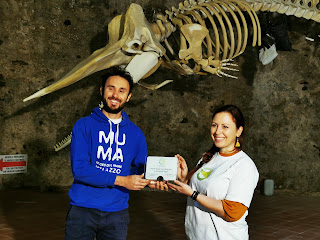 Carmelo Isgrò, founder and director of the MuMa – Museum of the Sea of ​​Milazzo, was awarded the “Sicily Towards Zero Waste” award for the virtuous citizens category. The biologist engaged for years in the protection of the sea and author of environmental awareness initiatives such as the swimming crossing of the Strait of Messina and the “Seaso Aeolian Tour”, a zero-impact journey in the name of environmental protection, was awarded today by the President of Zero Waste Sicily and Zero Waste Italy referent Manuela Leone, in the presence of Carolyne Berger Deputy Director of the MuMa and some members representing the volunteers of Zero Waste Sicily, in an unprecedented private formula in the absence of the public due to covid restrictions. The recognition established by the Sicilian Zero Waste Association to reward Sicilians and Sicilian realities that have distinguished themselves in the promotion, implementation and education to sustainability in waste management, was awarded to Carmelo Isgrò for “having been able to mobilize the attention of many on the issue of environmental responsibility and having witnessed through his commitment the profound significance of individual action as the engine of collective change. “. 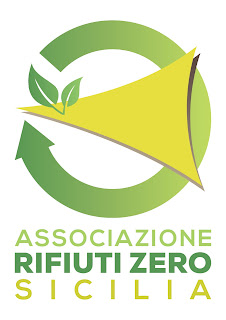 “A drop is not just a drop because if combined with others it can turn into an ocean. Knowing the story of Carmelo and the Sperm Whale Siso, of the over 1000 volunteers who have given soul from many parts of the world to the MuMa project means immersing oneself in a significant experience “- declared President Leone on the sidelines of the delivery -” the transformation of an event as dramatic as that of the man’s death of the sperm whale Siso in a visible, indelible and speaking warning of the polluting and irresponsible behaviors caused by environmental and ecosystem degradation was an act that ignited a new important spark of change in this Sicily. Delivering the “Sicily Towards Zero Waste” award to Carmelo meant for us to want to thank him, in our own small way, for transforming the network that “trapped Siso” into a human network of solidarity and action aimed at achieving sustainability goals. environmental.”. “I am very happy to receive this important award. The Zero Waste Strategy which is linked to the reduction of waste production, consumption of plastic and above all disposable is the philosophy that we want to continue to pursue and promote tirelessly in all our activities “- the excited words of Carmelo He cheered. The delivery of this award should have taken place on 7 March 2020 at the Auditorium of the Benedictine Monastery in Catania on the occasion of a regional event organized by Zero Waste Sicily, but the event was among the first events canceled due to the lockdown. 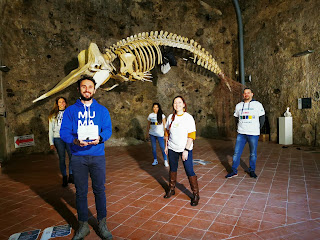 Rossano Ercolini, Goldman Environmental Prize 2013 and president of Zero Waste Italy and Zero Waste Europe should also have attended this event. In the impossibility to date of being able to carry out the award ceremony in the great regional event, the Sicilian Zero Waste Association has undertaken a tour in recent weeks to directly deliver the prizes to the 8 realities that have received the recognition. The delivery tour through Sicily of good practices will become a video story made by the newspaper “Italia Che Cambia”.