Something strange has been happening in Sicily for a week: people no longer recover from Covid. In the last week (March 29-April 4) in fact – according to the data provided by the Region to the Ministry – there were just 681 people who defeated the virus. A figure in contrast with the weekly average for the month of March. Going back, it can be observed that in the week from 8 to 14 March on the island, 4,890 healed were recorded, in the following week 3,001, while in the week from 22 to 28 March 4,632.

In short, a collapse that cannot be explained (table by Open Data Sicilia), and which coincided with the investigation by the carabinieri of Trapani on the alleged falsified data which led to the arrest of the regional manager Maria Letizia Di Liberti and the former councilor Ruggero Razza to be among the suspects. The reasons could be two: either that before somehow the number of healed could be reported incorrectly to keep down the current positives or that after the chaos there is still some communication defect and therefore the people who have negativized themselves are not communicated in time. 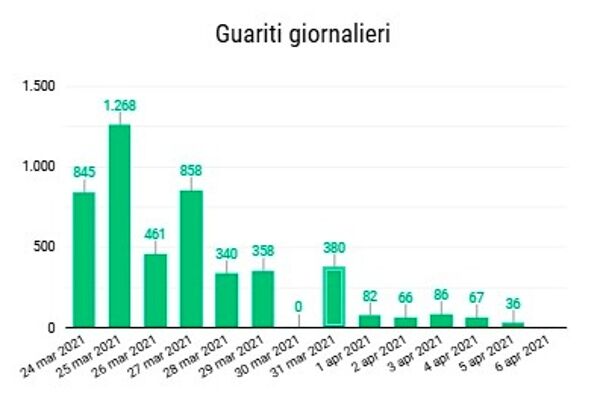 The fact is that the number of current positives (given that is obtained by subtracting the healed and dead from the total cases), equal to 23,705 according to yesterday’s bulletin, is up by over 6,000 units compared to the previous week. As a result, people in home isolation are growing. In the past week, however, there were 7,005 new cases of contagion, 20.5% more than the previous one. The threshold of 7,000 new positives was not exceeded in a week since last January 24th.