It stands 429 meters above sea level on Monte Pellegrino and was founded in 1625. It is accessed by means of a long staircase. The 17th century façade is leaning against the cave where the relics of the Patron Saint of Palermo were found on 15 July 1624 and where, according to popular legend, Rosalia lived the life of a hermit, a woman of noble birth, born in 1130 and still dead here. young in 1166.

In the year of the finding of the relics, the city was afflicted by a terrible plague, the Spirit of Rosalia appeared, in these solitary places, to a hunter to whom he indicated the place where his bones were located, which, collected and transported to procession through the city, chased away the disease and so Rosalia was proclaimed protector of liberated Palermo. Every year, from 10 to 15 July, the “feast” is celebrated in memory of that liberation.

The sacred cave is preceded by a vestibule with three arches resting on twisted columns in which various tombstones recall the devotion to the saint of the Bourbon and Savoy kings, and the one that recalls the visit of the German scholar Goethe, which took place in 1787. Under a canopy, it is the altar with the simulacrum of the lying Saint, a marble work by Gregorio Tedeschi of 1625, covered in 1735 with a gold leaf donated by Charles III. 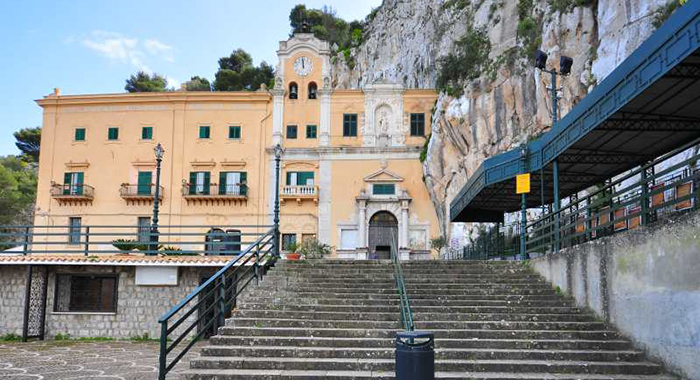