Day against violence against women

The inauguration on Saturday at 11 in via Dante near the civic 52. 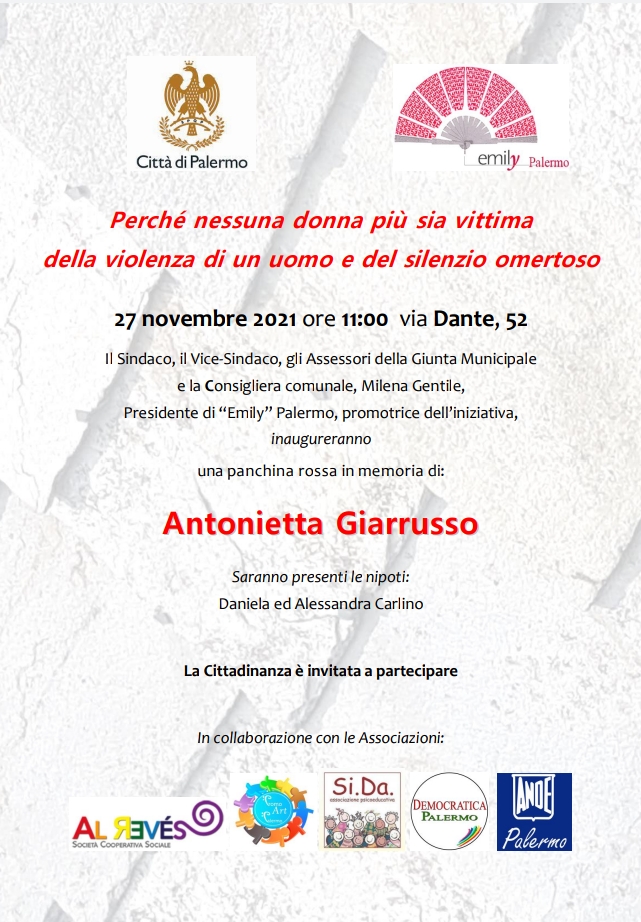 Saturday 27 November at 11 in via Dante near the house number 52, the mayor Leoluca Orlando and the entire municipal council, together with the association Emily Palermo , promoter of the initiative, will inaugurate a red bench near what used to be the commercial establishment of Antonietta Giarrusso , killed with 27 stabs in his wig shop on 30 April of 2012. To date, the person responsible for the murder is unknown.

To keep the memory alive, the victim’s niece, Daniela Carlin or, contacted the municipal administration through of the Councilor Milena Gentile , who is also the President of the Emily Palermo Association.

Citizens are invited to participate in the ceremony, which will be attended by, among others, Daniela and Alessandra Carlino, grandchildren of Antonietta Giarrusso

“This red bench – declares Milena Gentile – it is not only a symbol of the fight against violence against women, it is mainly a tangible signal that the City does not forget Antonietta Giarrusso, a woman whom we remember as mild and hardworking, ended by the ferocity of a man who unfortunately has not yet paid his guilt also thanks to the silence of many. The brutal killing of “Signorina Ninni”, as her most loyal customers used to call her, has left a mark in the memory of many and many Palermitans. When my niece Daniela Carlino asked me to be interested in why the city could remember her aunt, the entire Emily association showed great enthusiasm for this initiative that protects from oblivion and sheds a light on a probable serious femicide. I take this opportunity to extend my heartfelt thanks to the Mayor and to the whole Board. In particular, I would like to underline that if we managed to install this special red bench near the International Day for the Elimination of Violence Against Women is above all thanks to the sensitivity of the Deputy Mayor Fabio Giambrone and Dr. Francesco Teriaca who allowed the excellent team of Coime, very well coordinated by Geom. Romano , to carry out the work with great speed; a heartfelt thanks also goes to the Councilor Cettina Martorana who immediately made the initiative her own with great participation and commitment; to the Councilor Giusto Catania and to Dr. Sergio Maneri who busily arranged the necessary investigations and inspections to verify their feasibility; to the Councilor Sergio Marino and to Dr. Paola Di Trapan i for having promptly found and made the bench available to the cause.

The municipal administration has thus shown great sensitivity for the relatives of Antonietta Giarrusso and attention to the issue of violence against women, with respect to which attention must never drop “.