The oldest room that constitutes the old church, was built in 1500 AD and was initially built as a chapel dedicated to St. Onofrio. Later, around 1700, another wing was flanked on the right side, where all the religious functions are currently celebrated. In the chapel there is the altar dedicated to S. Onofrio, whose statue dates back to the 15th century, the work of the Blind man from Palermo; the altar below the polychrome marble statue is in Baroque style (15th century).

To the left of the entrance hangs a picture of Maria SS. of the Rosary of Pompeii and, in a canton, the statue of San Biagio (dating back to the early 1900s) and two showcases containing ex-voto of St. Onofrio and San Biagio (from the early 1900s); a handcrafted confessional closes the wall. On the right side of the chapel there is a marble stoup, surmounted by a statue in white Carrara marble, depicting S. Onofrio dating back to the 15th century, from the Gagini school.

The right wing of the Church, built in the 1700s, includes a main altar and two side altars. Instead, on the left side of the wing, it is possible to admire the altar dedicated to Jesus Crucified from the eighteenth century. The main altar is in polychrome marble and is surmounted by a wooden crucifix from the end of the 18th century. Behind the main altar there is an altarpiece depicting the death of St. Onofrio and the ascension of the naked soul to the Creator, surrounded by angels and assisted by the abbot Pafnunzio (work by Giuseppe Salerno called the Zoppo di Ganci) .

On the back wall there is the table of the managers of the Compagnia di S. Onofrio founded in 1548; it is in wood carved in walnut and cherry; the seat is leaning against the wall and on its sides there are two wooden seats, sculpted in 1567 by Calandra. Above the seat hang two paintings depicting one the Holy Family and the other the Sacred Heart of Jesus. In the box above the managers’ table there is a lead pipe mechanical organ from the 1700s. In the vault, an interesting fresco depicting S. Onofrio kneeling, made by Carreca. 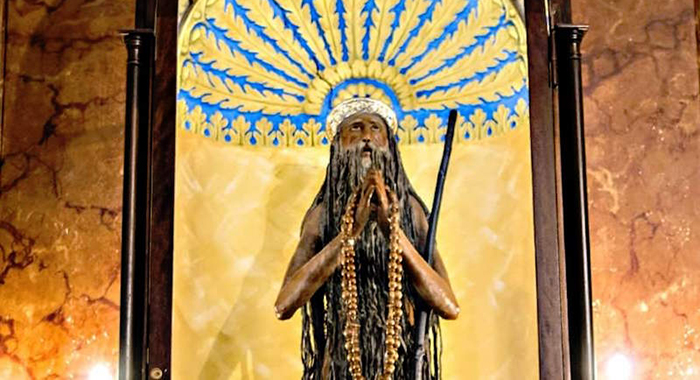