Built starting from 1682 on a project by Paolo Amato, who adopted, for the plan of the church, the elliptical plan, covered by a large dome and prepared a large decorative apparatus aimed at astonishing the spectator. The main façade has clear and severe lines; in the first order windows and niches alternate, surrounded by complex stone cornices; in the second order there is an elegant loggia with three arches, ended by a monumental semicircular tympanum.

In 1763 the majestic dome was covered, towards the outside, by a loggia, to protect the vault from the infiltration of rainwater. You enter inside by means of a marble staircase where on the sides there are frescoes painted by Vito D’Anna around 1763: “The Miracle of St. Basil” and “Sermon of St. Basil”. In the large space of the room there are two deep chapels and the rectangular chapel, diametrically opposite the entrance.

Of the sumptuous Baroque decoration, part of the stuccos of the pilasters remain, those that surrounded the altars and the four choirs and the beautiful frieze above the choir with a large stucco angel. On the right side is a magnificent wooden Crucifix, on a curtain in mixed marble, with the statues of St. Michael the Archangel, St. Cajetan and Mary Magdalene. The church is frequently used as an auditorium. 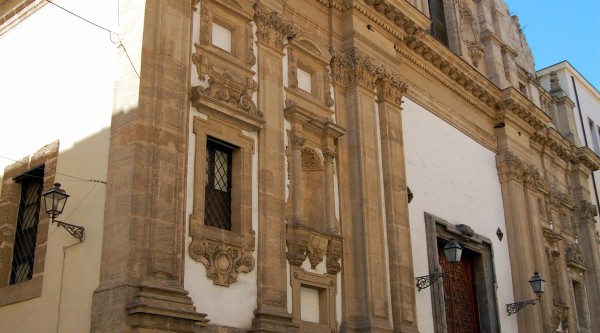