Built in 1573 by the Compagnia del SS. Rosario established in 1568, to which belonged important artisans and traders such as Pietro Novelli and Giacomo Serpotta. It is considered one of the most elegant and richest oratories in the city for the wonderful stucco decoration, made by Giacomo Serpotta, and for the presence of valuable 17th century canvases by Flemish authors, including Van Dyck, Italian, Sicilian and school Caravaggesque.

It is accessed through an anti-oratory with the altar of the Crucifix; the rectangular room has a small upright chapel. On the walls there is a sequence of paintings, made in the first half of the 17th century by various painters, with the representation of the Mysteries of the SS. Rosario, alternating with the sculptures of the Christian Virtues, prepared by Giacomo Serpotta. On the entrance wall are: the “Resurrection”, the “Descent of the Holy Spirit”, by Pietro Novelli, the “Ascension of the Virgin” and “St. Caterina “. On the right wall are: the “Oration in the garden”, the “Flagellation”, the “Crowning with thorns” and the “Ascent to Calvary” by Flemish artists and the “Crucifixion” by the school of Van Dyck.

On the opposite wall are: the “Annunciation”, the “Visitation” by Guglielmo Borremans, the “Nativity” and the “Presentation in the temple” of the school of Pietro Novelli and the “Dispute between doctors” by Novelli himself. On the main altar is the “Madonna and Saints” painted by Antonio Van Dyck in 1628. this work had a great influence in Sicilian painting of the seventeenth century and represented the most popular genre for the oratories of wealthy companies who competed to win the works of the most renowned and best paid artists.

The sculptural decoration covers the walls left free from the paintings with harmony and organicity; a vast sculptural repertoire animates the simple hall, with figures of putti, ladies, knights, all perfectly defined with great detail and arranged with masterful elegance to merge into a single compositional organism. These are alternated with the statues of the twelve Virtues, a true Serpottian masterpiece in which the author’s now classic vein is revealed. 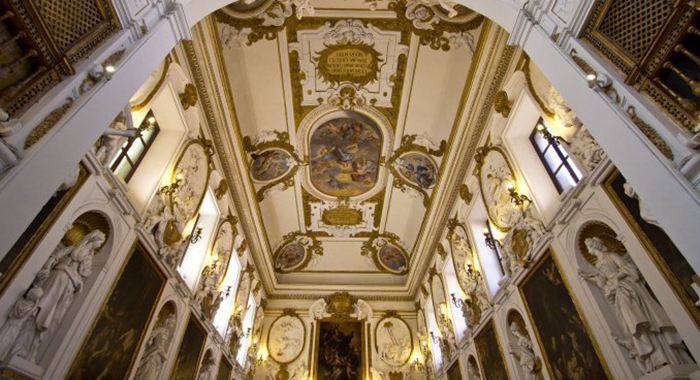