The magnificent building was built in the second half of the 16th century and defined in 1686 after a disastrous fire. It has external vestments characterized by strong arches, ashlar of the first order and decorated in the key with masks in stone; in the second order strongly raised pilasters frame the openings from the classic exhibitions. A continuous iron balcony runs along the string course.

The building incorporates on the first level the ancient church of Vittoria built in the place where there was an ancient gate, from which the Norman leaders entered the city in May 1072. in memory of this event a chapel was built with the image of the Madonna of Victory. The oratory was commissioned by the Compagnia del SS. Crucifix known as of the Whites for the white cloth dress they wore, which was responsible for accompanying the condemned to death to just death.

Inside you can admire the splendid Serpottian stuccos; late Baroque and classical statues from the 17th and 18th centuries. Behind the large oratorial hall known as the largest in the city, there are two rooms intended for the display of plastic artefacts from the 17th and 18th centuries; to follow, there is the sumptuous “Salone Fumagalli”, originally intended for the meetings of the confreres, entirely frescoed in trompe l’oeil by Gaspare Fumagalli who was signed there in 1776. 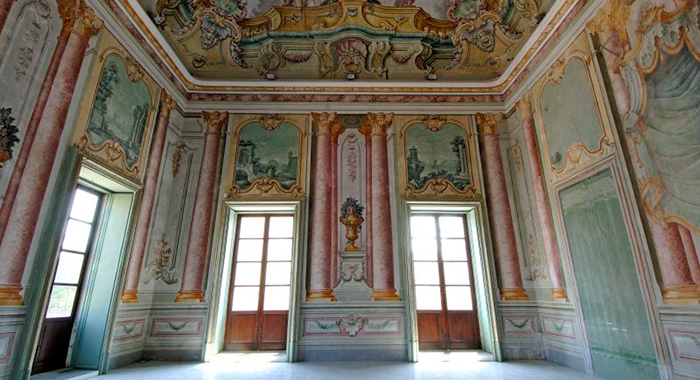