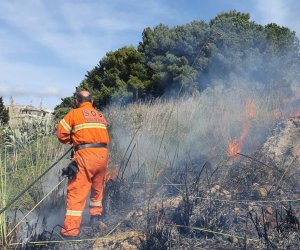 Moments of fear, this morning, in Valderice for a bush fire that threatened to attack some houses.

The flames developed in the Misericordia district and fed by the strong Scirocco wind immediately spread, extending towards the hamlet of Ragosia. Immediate intervention of the volunteers of the Sos Valderice association who immediately did their utmost to make the houses safe.
When the alarm was triggered, the fire brigade teams also intervened and managed to stop the threatening advance of the fire. A few hectares of brushwood in smoke.

On the causes of the fire, the firefighters are not unbalanced waiting for the results of scientific findings.
The fact is that once again the fire broke out on a day marked by the strong gusts of the Scirocco that have been lashing the territory for two days. This is a circumstance that does not exclude the hypothesis of an arson fire.