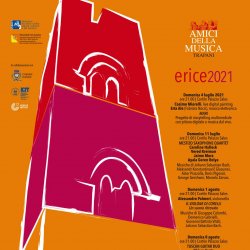 The provisional program “Ericeventi D’Estate 2021” was approved in Erice. The calendar is articulated and diversified and will contain a series of concerts, shows, events of a high artistic and cultural level, with the participation of internationally renowned performers and personalities who will animate the area of ​​Erice and, in particular, the historic center. Four months of events from July 4th to November 4th.

«Erice wants to start again on the right foot – comments the mayor Daniela Toscano -. This review represents a piece of an overall strategy for the promotion of tourism and the image of the territory, as well as the relaunch of our local economy which has suffered so much from the crisis due to the emergency. We have decided to make the territory the protagonist with its excellences, especially the artistic-cultural ones, focusing above all on our excellences while not underestimating events of international appeal such as, for example, the exhibition “De Chirico e Ventrone. The victory of painting ”. The calendar of events that is the result of the work of our offices is designed for all age groups and we are sure that the synergy with the various associations and organizations will be able to give the important impetus that we all hope for. The calendar is provisional and there will be other news including an exhibition of Animated Brass ».

«The return to normality also involves planning a widespread, homogeneous and reasoned calendar of events – adds the councilor Rossella Cosentino -. After the paralysis of tourist and cultural activities already in June we wanted to give a message with the opening of services aimed at tourists such as the tourist information and assistance point, that of cultural sites, the reopening of the municipal wine shop, the exhibition of De Chirico and Ventrone and other various initiatives already carried out. These are the premises of a summer full of events of various kinds and wide-ranging that will network the great vitality of Erice with everything it can express, especially in cultural and artistic terms. Culture, however, is not only made up of monuments, but also and above all of people who work to spread it and the message we want to give to the territory and to the world is that Erice is there and wants to start again: we feel the weight and the duty of having to do it. I tell tourists to come to Erice. To our fellow citizens I say instead to be tourists of our wonderful city ».

The program may undergo changes even pending the approval of the 2021 Budget.

“De Chirico and Ventrone. The victory of painting “

presentation of the new book of poems by Stefania La Via, edited by Angela Grammatico

Presentation of the book: “The tiger of Noto” by Simona Lo Iacono

presentation of the volume “Il Polo Museale A. Cordici. The story of an ancient city ”by Salvatore Denaro

11.00 Civic Library, Meeting of the winning writer with a group of young high school students

youth orchestra of the province of Trapani “Sheherazade”

from 10 to 12 September
Street Art

from 25 to 27 September
Federicina Feast

First three weekends of October
“THE PATHS OF TREASURES” Festival

“De Chirico and Ventrone. the victory of painting “

July / August / September in weeks to be defined