CATANIA – It ended yesterday, Sunday 25 April, on long weekend of vaccinations without reservations, wanted by the president of the Sicilian Region. Hubs and Vaccination Points remained open until 8pm.

It is given the possibility to over 60 – people between 60-79 years, which do not present fragility – di get vaccinated in the Hubs and Reference Centers of the Region, with AstraZeneca serum, even without reservation.

9 Hub in the province of Catania 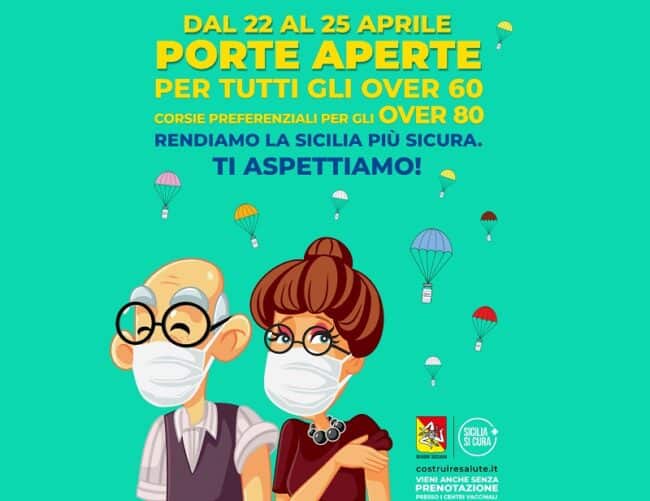 Furthermore, at the disposal of the Strategic Directorate of the ASP of Catania and the Commissioner for the Covid emergency of the metropolitan area of ​​Catania, in harmony with the forecasts of the Regional Health Department, from today, Monday 26 April, will continue to be active, atHub of Catania, the path dedicated to people over 60 (born in 1961), not fragile and not reserved, for the vaccination with Vaxzevria.

Therefore, as happened in these days with the Open Day, users aged between 60 and 79 years, not fragile, will be able to go directly to the Catania Hub, even without reservation, following exclusively the “Open line” route, to receive the vaccine.

The activated procedure, of direct access, it does not provide for the possibility of changing lanes for other type of vaccine.

In the province of Catania the data on vaccinations record a constantly growing trend. In the lasts three days (from 22 to 24 April) were administered, overall, in all the Vaccination Points of the province, well 15,587 vaccines, divided as follows:

A important result, fruit of the positive synergy between Asp of Catania, Hospitals is doctors of general medicine.

High turnout also at the Hub of Catania in which, again in the last three days, they have been inoculate, overall, 4,472 doses of vaccines.