Belonging to the Dominican order, it was built between 1566 and 1596. The church develops longitudinally, crossed by the transept on which the dome starts. The late Renaissance facade is severely forced; in it there are still the portal and windows of Gaginesque derivation. In the center, on the portal flanked by columns, there is a marble statue of St. Catherine from 1685.

Notable example of religious architecture in the Baroque style: its interior, with a single nave, has a formidable eighteenth-century decorative decoration; its walls are covered, without interruption, by a rich polychrome marble mantle.

On the entrance is the choir, enlarged in 1683, supported by spiral columns in red marble. The sub-choir was decorated with frescoes by Francesco Sozzi in 1769, and represent scenes from the life of the Saint. The vault, with gilt stucco arabesques, was painted by Filippo Randazzo in 1744 with the “Glory of St. Catherine”. The frescoes in the dome, painted in 1751, with the “Triumph of the Dominican Saints”, are the work of Vito d’Anna.

Of particular interest are the precious paintings in mixed marble and bas-reliefs placed at the base of the pilasters, in the nave, which depict: the “Story of Jonah” and the “Sacrifice of Isaac”. The presbytery was masterfully designed by Giacomo Amato and endowed by various sculptors with a particularly fine and sumptuous decoration; the sumptuous high altar is in hard stones with an amethyst tabernacle. 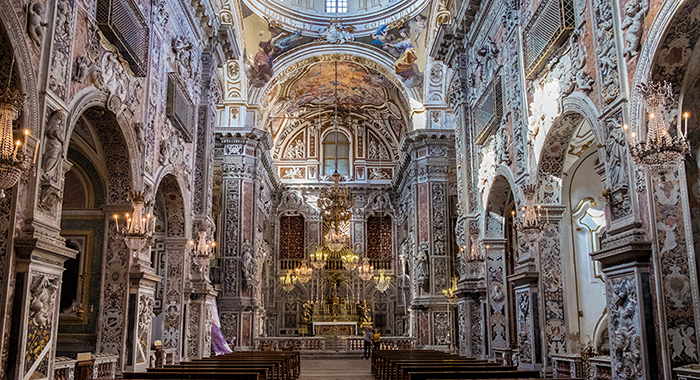