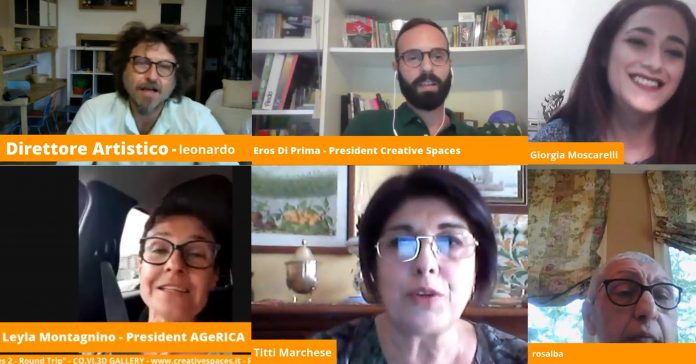 A week after the closing of the exhibition “Bridges 2 – Round Trip”, which ended on Sunday 27 June, with the finissage broadcast in live streaming, we are pleased to communicate the great appreciation and success we have encountered.

The international exhibition, organized by the AGeRICa Association, with the patronage of the Municipality of Caltanissetta, disseminated the exhibition in digital mode. For the exhibition, the virtual museum of the Creative Spaces Association was chosen, the CO.VI.3D GALLERY, an excellent digital museum project born during the first lockdown in 2020. The association managed the curatorship, the digital and 3D realization, direct opening and closing and advertising on the museum website and on social media.

The virtual mode allowed the participation in the event of 42 artists from various parts of the world: Italy, United States, Poland, Lithuania and Russia.

“Bridges 2 – Round Trip” was born in the wake of the great success of the first edition, entitled “Bridges, Trasversamenti Trasversali”, built in the historic Palazzo Moncada in 2017, and inaugurated in the presence of the Rochester delegation, visiting Caltanissetta for the celebrations of the 50th Anniversary of the Twinning. The artistic direction was entrusted to the internationally renowned Nisseno artist Leonardo Cumbo.

Now we are aware of the enormous success of “Bridges 2 – Round Trip”, the statistical data extracted from the platforms used for the dissemination of the exhibition, leave us satisfied and speechless for the appreciation of the public. Numerous comments of esteem from those who have enjoyed art. From the statistical data of the Creative Spaces web site, it is clear that the users who have visited and interacted (see download exhibition catalog) are many. The site views were 10,781, almost 300 actions on the internet page, more than 20,000 video views and coverage exceeds 50,000 users. As for the Creative Spaces Facebook page, we read an overall interaction on the site that exceeds 22,000, with interactions and coverage of individual posts, which also reach 3,200.

We remember the artists who took part in the exhibition:

Each of them interpreted the proposed theme with originality and professionalism: Bridges – Round Trip, using different artistic techniques such as painting, collage, photography, pen graphics and computer graphics and creating works of art that they donated. many emotions and many food for thought.

We thank once again, all those who contributed to the realization of this exhibition, starting from the Municipality of Caltanissetta, which granted the Patronage, to the staff of Creative Spaces for the excellent work done, to the partners of Rochester thanks to whom we had the presence of the artists of the twin city (Caltanissetta-Rochester Sister Cities Committee, International Sister Cities of Rochester, NY, Inc., City of Rochester, NY, Image City Photography Gallery), to the associations that have shared our idea (ArtisticaMente, ATAD, CulturScambi, Pro Loco of Caltanissetta) and to all the artists who, with their participation, have allowed the success of this project.