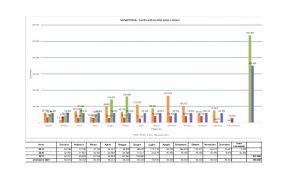 +189 thousand euros compared to 2019 and +345 thousand euros compared to 2020. This is in a nutshell the result recorded in the first six months of 2021 for the collections deriving from the building concessions in amnesty.
«The positive trend of the past months continues – commented the Mayor dr. Francesco Miccichè and the Councilor for the branch ing. Gerlando Principato – which allowed the Municipality to collect more than 537 thousand euros in the first six months of 2021 ».
«A result that assumes greater importance – explains the Principality councilor – and which gratifies the work of the building amnesty manager, arch. Gaetano Greco and the employees of sector V, as well as of the entire administration, if we consider that it has been obtained and it is right to highlight it, with only the technicians of the Municipality of Agrigento, and that it is allowing the administration to carry out Miccichè other programmatic objectives . Soon we will also have external technicians to whom we have entrusted since last month, the tasks of carrying out the building amnesty practices, to give us a hand in the process of experimenting with the practices, which we remember allow the municipality to have sums available, but at the same time it guarantees the technicians both internal and external to the municipality to receive compensation ».
The sums ascertained and collected by the Municipality allow the institution, which operates in the twelfths regime due to the lack of budgets, to initiate forms of investment, necessary to try to restart the public works machine. “We reinvest – explains the Principality councilor – the sums received from the building amnesty, in the expenditure commitments that the administration must take on, to bring the actions of public works, often still in the embryonic state of preliminary design, to the definitive and executive design , a necessary condition to receive funding for the works. To be financed, then receive sums from the Sicily Region and the State – explains Principato – the projects must be executive, while the works reported, (first you put the money of the body for the design and to carry out the works, then you show how much you have spent and then I return the cost incurred). In this way – continues the Councilor Principato – as an administration, we are taking on responsibilities to achieve the programmatic objectives, but at the same time we are reopening to the market, giving work to geologists, surveyors and designers (engineers and architects), with certain times and defined. We are trying to carry out a managerial model, on the one hand, by exploiting the experience of dr. Giovanni Mantione, head of the financial offices and public works manager and on the other hand activating actions inside the Giants’ building for coordination with the managers, the RUPs and the working groups involved. We are convinced – concludes the Principality councilor – that by setting objectives in time, with a correct and thoughtful control of the actions, we can produce solutions for the improvement of the body, and implement the correct policies for our territory ».